Where do I start with 2010? Mind-blowingly mental would be the best way to describe it. I suppose you could call it the most awesome year by far, which is funny considering that is exactly how I referred to 2009.

Overall, 2010 was my busiest year to date, by an immense margin. It was also my proudest year, in both work and education. And, unfortunately, it was also the year my family literally shrank by 20% (somehow, putting a statistic on a fact like that makes it a little less morbid). However, as shit as losing family members is, it's important not to dwell on the facts of life. I suppose it's fortunate really that the rest of the year completely rocked and gave me plenty to be happy about.

You'll have to excuse the self-indulgent nature of this post, but I honestly believe that if you're proud of something, you shouldn't be afraid to talk about it. In any case, you only have to put up with it once a year!

Last January, I put together a list of goals that I wanted to achieve in 2010. They were fairly modest, in hindsight, but did I achieve them? In short, sort of.

Success! The great thing about working on so many personal projects over the year is that I got I open source them. The projects that I open sourced this year were:

I get a weird kick out of making my code publicly available, so I'm definitely going to try and continue this method of development in the future.

Fail! I was offered the opportunity to meet this goal, but other commitments got in the way.

Fail! I definitely wasn't thinking straight with this goal. I have no idea why I thought that I had the time or desire to produce an entire iPhone application from scratch. It's an interest of mine, but that's about it for now.

Make something big with Arduino

Fail! Unfortunately, this never happened in the end. I absolutely love Arduino, but nothing cropped up throughout the year that justified me spending a lot of time constructing something with it. The good news is that I have a big project lined up for 2011 that will involve lots of Arduino.

Fail! It was a nice thought, but it never materialised, aside from publishing one of my essays.

Choose something profound for my final-year project

Success! For my final year at university I am required to work on a large production project; something that pushes my skills while looking awesome at the same time. I chose to create Rawkets, a massively multiple space-based shooter game, built using new Web technologies like HTML5 canvas and WebSockets. It's since turned into a bit of a pet project of mine, with some pretty interesting features planned for 2011!

Tackle a fascinating topic for my dissertation

Success! Aside from the final-year project, there is a dissertation that must be written as part of my degree. After some early indecisiveness, I ultimately ended up choosing to look into the analysis of sentiment on Twitter. It's a completely mind-boggling subject area and, coupled with my passion for data-visualisation, will prove very interesting when I eventually plot my findings on a map. I'm quietly confident that I'm going to uncover some pretty interesting things with my thesis, so watch this space!

Learn and use Git properly

Success, ish! One of my major programming flaws used to be that I didn't use a version control system to manage my code. This meant that anything I created was essentially the one and only version. God save me if I accidentally overwrote a file, or took a wrong turn in my development. My aim for 2010 was to get to grips with the Git version control system, and boy am I glad I chose it as a goal! Through the open source projects that I worked on, as well as private projects completed for work and education, I ended up using Git for just about everything. I'm still no expert, but at least I'm confident enough to use it without a hassle now.

Achieving a First in my second year of university

University definitely gets a little more serious when everything starts to count. Now, I don't know if it's because I'm getting old, but I had a sensible head screwed on for my second year. It paid off, as I achieved a First with the second highest mark in the year (damn you Fran)!

I know, I know. Geeks aren't allowed to have relationships and all that normal malarky. Well, I have one; get over it! Nah, in all honesty, I'm completely and utterly flabbergasted that someone as beautiful and intelligent as my girlfriend would decide to spend their life with me. One day I'll find out who put her up to it, but for now I just want to sit back and appreciate every day I get to spend with her. I wouldn't be where I am today without Lizzy Robins.

Working at Redweb through the summer

In what's turning out to be a regular occurrence, I spent the entire summer period working for Redweb. I was in the innovation department again, but this time I was working alongside two other student interns. It was fantastic fun, and we got to play with all sorts of interesting and new technologies. One of those technologies was Adobe Stratus, which proved to be incredibly useful for creating Twitter-based webcam battle games!

One of the most enjoyable and enlightening experiences this year has been creating and co-hosting the ExplicitWeb podcast with John O'Nolan and Hannah. I certainly have newfound respect for podcast creators; it's bloody stressful trying to record everything through Skype, editing, and publishing it to iTunes in the space of a few hours.

If I had to pick one event that defined my year, it would have to be the HTML5 Google balls experiment. I still can't believe how something that started as an idea in the shower and two hours of programming, turned into a semi-viral HTML5 demo that traveled all the way around the world. Practically every awesome thing that has happened this year happened as an indirect result of this experiment. I wonder if it will ever happen again…

Writing a book about HTML5 canvas

This is a close second to the HTML5 Google balls experiment, but only because it came about as a result of it. I still have to pinch myself every so often, as I can't quite believe that I was asked to write a book for Friends of ED and Apress; a family of massively respected publishers in the tech world. It won't be out until next spring, but definitely go and pre-order it from Amazon; you know you want to!

I was honoured to have a full-house at the first HTML5 canvas hack night in Bournemouth. It was the first real public event that I had organised and put on by myself, and it was an incredibly educational experience. I even think some people enjoyed it! I have to thank Microsoft (again) for sponsoring the night and buying everyone pizza. The plan is to put on more of these hack nights across 2011, so keep an eye peeled on my Twitter account.

In December I was given the opportunity to speak about Rawkets at the Mozilla Labs Open Web Gaming event in London. There were around 150 people attending on the night, and it was a fantastic experience. I met some great people there, who have inspired me more than they probably know!

I'm not going to do random little goals anymore; from now on, I'm going to define specific plans for the following year. I believe goals are a little too easy to discard; I see them a little bit like resolutions — pointless. So without further ado, I give you my specific and completely un-goal-like plans for 2011.

Public speaking is one area that I want to really practice. Throughout 2010 I got to speak at a few events, but I need to do much more than that if I want to really improve, like on my delivery and audience interaction. So far, there are a few speaking gigs already lined up for the beginning of 2011; Heart & Sole being the largest of them. I'd absolutely love to take on more opportunities to speak about my projects and technologies like HTML5 canvas and WebSockets, so please get in touch if you're putting on a suitable event.

Since starting Rawkets as an experiment into new Web technologies, it has quickly blossomed into something quite dear to my heart. I've big plans for the game that I plan to implement by the middle of 2011, when the official public beta is released. As an evolving project, it will probably never be classed as finished. However, the functionality that it will have on beta launch will be pretty impressive for something made using in-browser technologies, if I can pull it off. My hope is that by the end of the year, through targeted exposure and word of mouth, the game will grow a pretty organic base of 500 regular players (regular meaning they play at least once a week). Let's see what happens!

Sell 500 copies of my book on HTML5 canvas

I have absolutely no idea when it comes to the selling of books, but that doesn't mean I can't dream! In all honesty, I've put a whole crap-load of my life into writing this book, and I'm really hoping that the time and effort will pay off. I'm quietly confident that this book will be fantastically useful for anyone who wants to get into canvas. How do I know that? Simple. I know that because there is a severe lack of resources around for learning canvas, and my book includes all sorts of useful gems that I've never even seen explained anywhere else. It won't be perfect, but it'll certainly be something that I wish existed when I got into canvas. This is all assuming that I actually finish the damn thing!

Find a source of income that allows me to continue experimenting

There's no doubt about it; I've achieved more in the last few years of experimentation than I have at any other time in my life. I'd be a fool to give up all of that just for the sake of getting a normal job. Saying that, I don't care what the source of income actually is; I just care that it allows me to continue doing what I love. You could call it an impossible dream, but let's see what happens!

Whatever happens in 2011, I'm fairly certain that it's going to be an exciting year, and not just for me! There is so much awesome work being produced at the moment, with so many amazing technologies. I'm genuinely inspired just by the thought of what's coming.

Here's hoping for another successful year!

Some interesting facts about 2010

I'll leave you with a few interesting facts and figures about 2010. 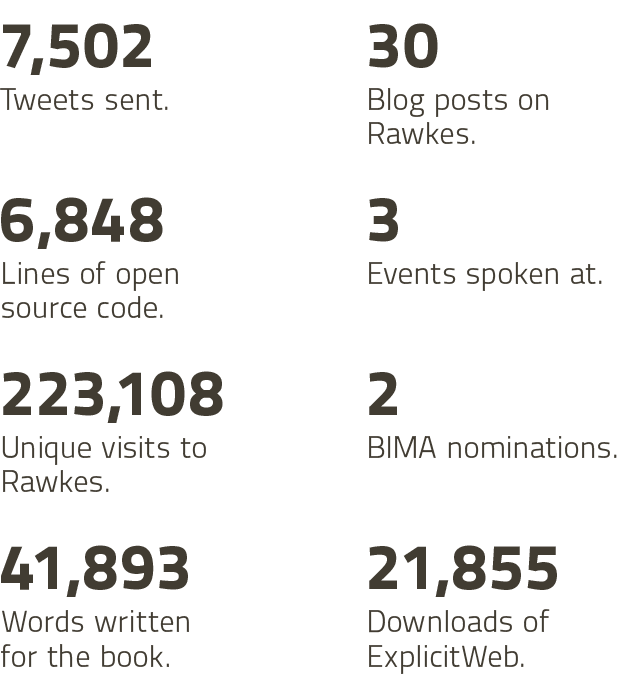