In this entry I take a look back at my favourite events that occurred in my life and the Web community during 2011. There were certainly enough to choose from!

This time last year I had enough trouble working out where to start when rounding up 2010. So how on earth am I meant to start the best bits of 2011 when it was easily the most insane year of my life, ever? And how the hell do you follow the Google balls phenomenon?

As always, please excuse the self indulgent nature of this yearly round-up. It is one of the only moment where I can truly reflect on everything that has been achieved in the space of a single, eye-blinkingly-quick year.

In all honesty I can barely remember the first part of 2011 as it was spent mostly with my head down working, writing, and travelling. The second half is still a little blurry as well but I'll try my best to round it all up nicely.

Finishing Foundation HTML5 Canvas was massively relieving, particularly because I wrote it while in my final year at university so I was pretty drained when I submitted the final chapter in March. I still can't believe that I actually wrote an entire book by myself, all 75,000+ words and 358 pages of it!

Writing it was really only half the battle, my half of the battle. What really made me happy was seeing the physical book in the hands of other developers, especially the ones who were on the other side of the world and who I didn't know. It's a surreal feeling knowing that someone many thousands of miles away is holding and reading something that you poured months of your life into.

Since publication I've received two royalty statements from Apress which outline how many copies have been sold and how big the pile of money is for me to dive into. Needless to say that you need a degree to work out these statements (they have a 6-page FAQ for one page of statement) but it's my understanding that at the year end about 1,250 physical copies of the book have been bought. Now back in 2010 I said that I wanted 500 copies of the book to be bought, so when combined with digital sales and online subscription services (like Safari Books) the number of people with a copy of the book far surpasses my wildest expectations. Mind-blowing.

One moment related to the book that particularly stands out was when a nice lady approached me at a conference in San Francisco and asked me if I was the guy who wrote Foundation HTML5 Canvas. Just that alone was enough to make the whole writing process worthwhile but she then proceeded to tell me how much she enjoyed the book and how much it has helped her. I must say that hearing those words from someone I've never met before in a country thousands of miles from home was quite overwhelming. I absolutely love hearing from people that have taken the time to read the book.

Getting a job at Mozilla

If having the opportunity to write a book wasn't enough I then received the chance to work for Mozilla. To this day I still don't quite understand how I managed to land the job, but I did!

It all start back in December of 2010 when I was given the chance to talk about my multiplayer HTML5 game Rawkets at Mozilla's Game On event. As a result of that talk and a blog post I wrote about my future plans I was pointed in the direction of an opening at Mozilla that seemed to have my name written on it, so I applied. I still find it funny when I think back to the moment that I realised that people could be employed to experiment with and talk about cool Web technologies.

Fast forward a few weeks and I was flown out to Mozilla's headquarters in Mountain View, California for an interview. I don't know what was more exciting, the interview or flying on a plane covered in graffiti. I jest, the interview was obviously more exciting (but the plane was cool).

Fast forward a couple more weeks and a few phone interviews and I heard the words that I'd been hoping for, I'd been offered the job. I'm not even going to try to describe that feeling but I'm pretty sure I stood up and walked around the house before sitting down again to make sure that I really heard those words.

Make no mistake, getting the job as a Technical Evangelist at Mozilla is by far the most proudest moment of my entire life. Full stop. End. Finito. It set the scene for the rest of the year and will continue to do so for many more to come.

I still don't quite understand how I managed to fit in my final year of university alongside writing a book and interviewing for the job at Mozilla. What I do know is that I wouldn't have been able to do it without the unending support from my lovely lady-friend Lizzy Robins.

What rounded off the year nicely was achieving a first class level degree, it really was the cherry on top of the cake and made the past 3 years feel all the more worthwhile.

Moving into a flat with Lizzy

My favourite non-Web moment of the year was moving into my first proper flat with Lizzy. I've really enjoyed settling down with her and the view from our place is beautiful, albeit only a "glimpse" (the words of the estate agent). There's something about being just a few minutes walk from an 8-mile beach that's good for the soul.

The second half of the year flew by equally as quickly as the first, especially because my 3-year university degree was over and I'd started working full-time at Mozilla. Part of my job includes travelling in and out of the UK to give talks and meet awesome people and doing that accounted for a large chunk of the past 6 months.

I won't list everywhere that I've been to and spoken this year but here are a few of my favourites. It's safe to say that I've travelled more in the past 6 months than I have in my entire life!

Back in January I spoke at the inaugural Heart & Sole event in the UK. I had an awesome time talking about HTML5 canvas and the venue was absolutely stunning, particularly the view from the 150-metre high viewing deck.

State of the Browser

In March I spoke about canvas at State of the Browser in the UK. What was special about this event for me is that it was the first time I spoke about my new job at Mozilla in public, which was made even sweeter by the Mozilla employees who were in the room at the time.

In July I was invited to give a talk at the San Francisco HTML5 User Group about the state of HTML5 gaming as well as another talk later the same week at the Google Mountain View headquarters about Rawkets.

Being able to speak in San Francisco was an awesome experience and very different to speaking in the UK. As for the Google talk, I can barely describe the geeky sense of epicness that I felt when talking at their headquarters in front of engineers way more intelligent than myself.

It's safe to say that I have never experienced anything like ASSEMBLY in Finland this August, I'm fully confident that the Finnish geeks and gamers are absolutely insane (in a really good way). I really enjoyed giving a talk about creating visualisations with new Web technologies, meeting the mr.doob, and generally taking in the atmosphere.

Being invited to attend and speak at the first large-scale HTML5 gaming conference in the world this September was pretty special. I had great fun catching up with old friends and making a whole bunch of new ones. The developers in Poland are pretty awesome I have to say.

Another event that was personal to me was WDC in the UK. It was at this event the previous year that I decided that I wanted to start speaking in public more, so being invited to speak at this year's event was pretty special. I talked about all the future Web technologies that developers should be keeping an eye on, with the WebVibrator API going down particularly well. No idea why!

Winning at the .net awards

In November I was fortunate enough to be nominated and chosen as the winner for Brilliant Newcomer of the Year at the .net awards. I've not really got much to say that I haven't already apart from thank you to those who nominated and voted for me. I'm mega-chuffed to be in this position.

This past December I celebrated 3 years with Lizzy, without whom I would have achieved practically nothing this year. I'm so happy to be with her and I owe her so much. I look forward to our future together.

In 2011 I was massively surprised by the sheer amount of amazing technologies that were starting to see the light of day. I was particularly interested in how the open Web gaming industry was coming on leaps and bounds.

The follow are by far my favourite technologies that I played with this past year:

Yes, yes and yes. Mainly as a result of my job at Mozilla although I'd still. 2011 has been a massive year for improving my confidence and abilities in regard to speaking in public.

Ish. I certainly released Rawkets but I never counted the amount of regular players and I'm confident that it would be no where near 500 people. Maybe 5.

Sell 500 copies of my book on HTML5 canvas

Yes, and then some. 500 would have made be incredibly happy but I had to settle with a measly 1,250 in the end.

Find a source of income that allows me to continue experimenting

Yes, although not where I expected it. I can safely say that I never considered a role of Technical Evangelist with a large player in the Web scene. I'm still counting the Mozilla job as meeting this goal though, so there!

Wishes and predictions for 2012

I don't do resolutions and I've given up on trying to guess exactly what will happen so instead I'm going to state a few wishes and rough predictions for the following year.

Some interesting facts about 2011

As always, here are a few facts and figures about the past year. I've added a +/- comparison to the previous year on metrics that are similar. 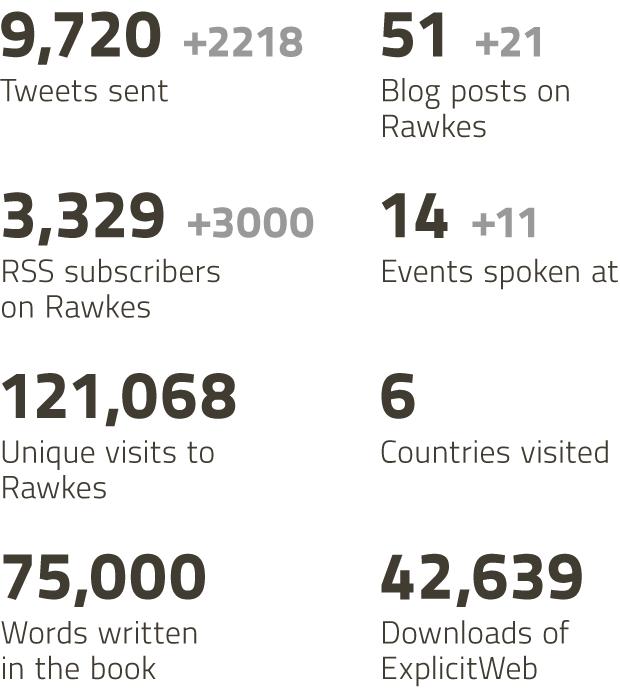