Note: This article was written 40,000 feet up in the air somewhere over the Atlantic, fuelled by relatively little sleep and what is probably the worst tea that I've ever had the pleasure of drinking. Enjoy.

I'm not going to lie, 2012 has been a pretty intense year. Both good and bad, it's been the craziest year of my life to date and a year that I'll never forgot.

If 2011 was about completing university and finding my feet within Mozilla, 2012 was about exploring new opportunities at the company and beginning to focus my efforts.

2012 was also the year that everything changed for me, the year that I decided to do the unthinkable and actually leave Mozilla. I'll touch on that in a little more detail later on.

So here's my overview of 2011, in no particular order.

On June 6th I celebrated my 1-year anniversary as a Mozilla employee. What's most crazy is that the first year just flew by in what felt like a few short weeks, not a whole year!

In that 1-year period, so much at Mozilla had changed…

There's much more than that, but those are the basics. It has certainly been an intense year within the organisation.

Travelling around the world, 5 times

Ok, so I haven't quite done a world tour but last year alone I travelled over 134,000 miles – 5 times the circumference of the world!

It's absolutely instance how much I've travelled since starting the job at Mozilla, I think if I calculated it all I've probably been away from home for 1/3 of the time – that's 6 months of travel. It's incredible to think that my partner Lizzy has been living in our home half a year longer than me, though I'm sure she's enjoyed the time without me annoying her.

Don't get me wrong, the travel has been a fantastic experience and one that I'll never forget. My fondest, and perhaps craziest trip is the month-long tour I undertook during May. From the UK, to Sweden, to Australia, to the US, to Canada, and back to the to UK, it was a pretty intense trip. Couple that with the fact that I gave something like 12 talks over that month-long period and you have a recipe for mild insanity. I took 2 holidays after that trip and I now see why!

2012 was the year that I finally gave Rawkes some love and refreshed the entire platform, from infrastructure to design.

The new platform puts the site in a much better position for future growth and allows me to focus on writing rather than fighting with process. I achieved this by moving from ExpressionEngine to a static approach using DocPad.

Aside from the infrastructure, the new design allowed me to give the content of Rawkes proper focus. It also made things much cleaner and readable, something I'd been missing from previous designs.

While I'm not 100% happy with the outcome, the new approach is a success and is stable footing for future improvements. Watch this space.

Falling in love with Firefox OS

Back in September I confessed my love for Mozilla's Firefox OS project, a JavaScript-powered operating system for mobile devices. That article alone received well over 50,000 unique visitors over the first few days of its publication.

The reason why I love the project so much is nothing to do with the fact that I work at Mozilla. Working here may have expedited my exposure to the project but I'd like to think that I'd still see its potential from the outside.

What I love so much about it is that it's a potential game-changer for the mobile industry. The ability to have mobile devices powered by open Web technologies is inspiring and exciting. Just imagine having the ability to completely customise and extend your mobile phone using the same technologies that you use to build basic websites.

Since confessing my love, the project has progressed a huge amount. It's now in feature freeze for the version 1 release, slated to land later this year. We now have experimental devices that I've been fortunate enough to play with, and they're amazing. The ability to run a complex OS on a low-powered device is quite an achievement, let alone it being created completely with Web technologies.

I'm very much looking forward to seeing the project hit version 1 and to see the future progression after that. There is so much more in the pipeline that you haven't seen yet!

Being incredibly proud of Lizzy

Without a doubt, I wouldn't be where I am today without the love and support of Lizzy. She has picked me up when I've been down, and supported me when I've needed someone to talk to. I may not say it as much as I should, but I love her to bits and would likely be a mess without her.

This past year has been a good one for Lizzy as well; she graduated from university, found herself a nice job, and started taking driving lessons. I'm incredibly proud of her.

And now we come to the difficult part of the past year, my decision to leave Mozilla. I recently wrote about this in depth, but the gist of things is that I wasn't happy there any longer and needed to explore new challenges.

Leaving the company that has helped shape and support me these past 18 months was the hardest decision of my live, by far. It was also the scariest decision. What do I do next?

I'm still finalising my next steps, but they're likely to involve taking some significant time off to unwind and explore some personal projects – perhaps 6 months or so. During that time I'll also be experimenting with ways of earning a living while keeping enough time and flexibility to do the things I want to do, perhaps via contracting or monetisation of my projects.

Whatever happens, I'm hugely motivated and excited to see where the future takes me. I'll be writing more about this new journey in the coming weeks.

Reflection on my 2012 wishes

Did this happen? Oh yes! We may have not seen any high-profile success stories for original HTML5 games but we certainly saw a rise in the significance and acceptance of HTML5 games. All the major browser makers committed resources to games in 2012, from both PR and technology perspectives.

Did this happen? I'm not sure. This was one of the areas that I didn't get to explore as much as I'd like. I did notice a few conferences that had deliberately chose young, hidden talent for speakers. I want to see more of that.

Did this happen? No, at least not from my own doing. This is another thing that I wanted to tackle in 2012 but never got around to it.

Did this happen? Yes! After much planning and faffing around, I launched the new version of Rawkes earlier this year. 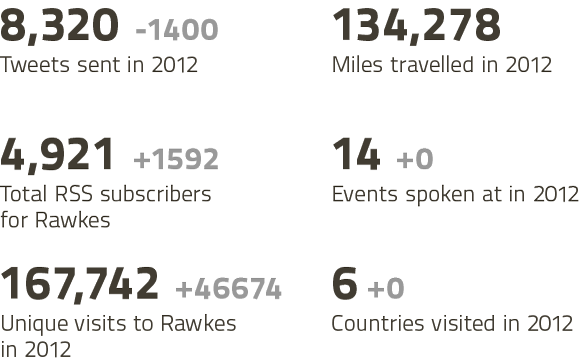