This time last year I rounded up my 2012. I wrote that it was the craziest year of my life so far, and one that I won't forget. I obviously had no idea what 2013 had in store for me!

2013 was the year for massive change in my life, in every aspect. The funny thing is that none of the changes were planned or even desired, yet I'm glad each and every one happened as they taught me valuable lessons that I'll remember forever.

Back in December 2012 I announced my intentions to leave my role as a Technical Evangelist at Mozilla, arguably my dream job. I wrote about the reasoning behind this in a lot of detail. In short, I suffered a combination of burnout and a catastrophic demotivation in what Mozilla was doing and what my role was there.

As of the 25th of January 2013 I was no longer a Mozilla employee, something I never imagined myself saying.

Lessons learnt: Even the most perfect things in life have downsides and if you ignore them you'll pay for it in the long run. Focus on keeping yourself happy, otherwise you'll cause yourself long-term damage.

After 4 years together, Lizzy and I decided it was time to call it a day. It's quite surreal uttering a few disembodied words and subsequently ending a relationship with someone you've spent practically every day with for what feels like forever.

Yes, of course it sucked. But no, I don't regret it and it was definitely the right decision for the both of us. What I was most surprised about was how we both handled it; from sitting down, talking for a while, and deciding that we should split up, to sorting everything out afterward so neither of us got left in a difficult situation.

2013 has shown us both that we're better off because of it. That makes me happy.

Lessons learnt: Good things sometimes come to an end, and that isn't necessarily a bad thing. Remember the good times and make sure you learn something from the experience. Things do get better in time, you just need to make sure you allow them to.

Taking time off to recover and find my way

Part of my decision to leave Mozilla was to take some time off to rest and work out what I wanted from life. What was planned to be 6 months out ended up turning into near-enough 10 months without firm commitment or income. I'm sure glad I saved while I was at Mozilla!

1 year on and, although much better, I'm still suffering from the burnout that I experienced while at Mozilla. Someday it'll fade into the background, though I've resided myself to the fact that it won't be any time soon, nor an obvious transition.

Lessons learnt: Take time off when you get the chance, it's a great healer. Don't force yourself to do something, it's nearly more valuable to do nothing and let your body tell you what it needs.

One of the general lessons I learnt from 2012 was that I had neglected my close friends. Part of 2013 was about fixing that, at least in a small way.

Over the year I spent much more time with my best friend of 10+ years, helping her through a tough and similar career problem, and generally looking out for each other. Although I don't need to see or talk to her often (the sign of a great friend), doing so has shown me how valuable my close friends are to me and how important that are to my happiness.

March was pretty special as I travelled to Wales to visit Matt and Sophie, two friends that I've known online for a long time but had never met before. I had a great time exploring their part of the world and being taught how to ride on Anubis, one of their (three!) horses.

Lessons learnt: Don't neglect your close friends. It sucks, and you'll look and feel like a dick because of it. You may not make things perfect but at least try your best to make an effort.

Soon after leaving Mozilla, Peter Smart and I decided to work on a seemingly innocuous project called ViziCities. Oh how naive we were!

Nearly a year to the day since we first started ViziCities, we've come a hell of a long way and have learnt a huge amount about the power of a good idea, especially when implemented well. So much happened but I'll try my best to round up the key events:

As it stands, ViziCities is still being worked on, just at a slower pace due to Peter and I both recovering from big changes and events in our lives. It's too good an idea to let slide.

Lessons learnt: When you have a good idea, run with it. Don't ruin a good thing by taking it too seriously too quickly. Release early and worry about making it perfect later. Working on something purely for fun and the good of others is an incredible motivator, don't squander it.

Doing things as me-me, not Mozilla-me

Fortunately I haven't found the desire to do much speaking of late, though I've had some great opportunities this year. Taking part in the real-time Web panel at EDGE in NYC is a particular favourite, as is speaking at FOWA in London toward the end of the year. Going on the stage as Robin Hawkes (of no affiliation) was quite a liberating and scary experience.

Most recently, I got to attend Mozilla Festival in London. This was lovely because I got to catch up with some of my old Mozilla friends and show them ViziCities. I don't think I've ever said so much to so many people in such a short period of time.

Lessons learnt: Doing things on your own is scary but ultimately liberating and rewarding. Don't shun opportunities to do things as you. Stay grounded — it's what you're talking about that's the important thing, not you.

Moving back to London

After spending what feels like most of my adult life living in Bournemouth, recent events gave me the perfect opportunity to up sticks and move back to London. I never thought I'd move back to London, or any city, but after travelling the world I can safely say that London is by far my favourite city in the world. There's something special about it.

I originally moved back with family, which was meant to be temporary but ended up lasting for about 4 months while I sorted my shit out. While slightly embarrassing as a 27-year-old, it was really nice to spend more time with my Dad.

Just before the end of the year I finally got the opportunity to move out and get my independence back. I absolutely hate moving but it's totally been worth it. Having a place that I can call my own is immensely good for my happiness and wellbeing. It also helps that the place I live is beautiful (right alongside the Thames).

Lessons learnt: It's easy to settle and get scared of change. Not having independence can really, really suck. Finding and moving house is incredibly stressful, but worth it in the long run. Make sure you find somewhere that makes you happy, even if it costs a little extra.

In October I decided to do something that I've wanted to do for a very long time; I changed my name back to the one I was born with.

For near-enough 16 years I've referred to myself as Rob Hawkes, completely shunning my full name because of bullying earlier in life and general habit since then. Changing back to Robin Hawkes has quite literally felt like a weight has been lifted from my shoulders. I feel like the real me is back again.

The feedback since changing my name has quite honestly been overwhelming; I never knew how much my friends preferred my birth-name!

Lessons learnt: Personal identity is something I should have taken more seriously. It doesn't matter how well you pronounce 'Robin', people in Starbucks will still write 'Robert'.

In November I decided that it was time to get serious and get a proper job, in a real office and everything. A few weeks later I started at Pusher as Head of Developer Relations.

It's been a couple months now and I've absolutely loved my time here so far — everyone at Pusher is amazingly friendly and good at what they do. I'm looking forward to working somewhere and actually making a difference.

Lesson learnt: Sometimes the obvious solution is the best one. Commuting can suck, but it can be solved (by moving house). Being part of something small(er) is an awesome feeling.

Looking after myself and listening to my body

In general, this year has taught me to look after myself and listen to what my body is trying to tell me (it's usually right).

Some of the things I've done this year include:

All in all, I feel much better about myself after doing these relatively minor things. Even just the regular exercise has had a huge effect on my energy levels, which I've noticed decreasing since I stopped cycling recently (due to winter and moving house).

Lessons learnt: Routine is easy, until you stop it. You don't have to cook crazy meals to eat well. Getting a good night's sleep is so, so important. Taking time off seriously will pay off in the long run. Burnout sucks.

Reflecting on my 2013 wishes

Fail. I completely neglected Rawkes in 2013, mostly due to taking time off and working on ViziCities.

Half-success. I didn't need to fund myself in the end as I sustained myself long enough on savings to last me until I got a proper job. I still got to work on my personal projects.

Massive success. While accidental, ViziCities proved to be incredibly valuable to the general public!

Release ViziCities to the public

Even if not the full feature-set that we envisaged, I want to make sure ViziCities can actually be used by people. It's too good an idea to let it sit and gather dust.

While perhaps not completely up to me, I think I'm ready to write another book.

I've done enough crazy stuff in the past few years to last me for a while. I'd be happy for 2014 to be spent taking things relatively easy and keeping myself happy instead. 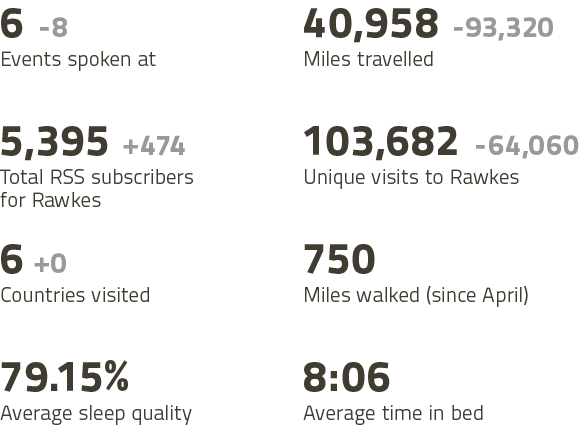 I find these retrospectives incredibly useful to me personally, especially when you have a few years-worth to look back on. I'd recommend you try doing them! So how was your 2013? Post it online and send me the link on Twitter.